This weekend, when we went grocery shopping, I was surprised to see my son spending lot of time in front of the toothpaste section of the supermarket and closely checking out their brands and packs. When I asked him, what was he searching for, he told me about the Colgate toothpaste packs which have magical sea world printed inside. He had seen the ads about these packs on television and wanted the toothpaste.

I picked a pack for him from the upper shelf. He was super-excited and eager to cut out the intricate little figurines printed on the inner side of the pack at the earliest.

He got to work as soon as we reached home, cutting out the boxes and arranging the sea creatures carefully on a board. I must confess, the figurines were really fascinating and even I was transported to the fairyland of childhood for a while. I relived those moments of innocent wonders and imagination again with him by  pitching in to help him with cutting the print outs of pirates, sea-creatures, and under-water castle.

It was such a pleasure to watch him completely engrossed in the fun activity, almost lost in the sweet world of dreams, spending his leisure time in a creative and constructive activity away from the screen and gadgets.

My son has always been fascinated with sea and the wonders that lie hidden within it. Along with cutting and arranging the figurines, he was also weaving a story about the magical sea world in the imaginary world of his brain. I realized this soon, as i was treated to a fascinating story, which i am sharing here with you- 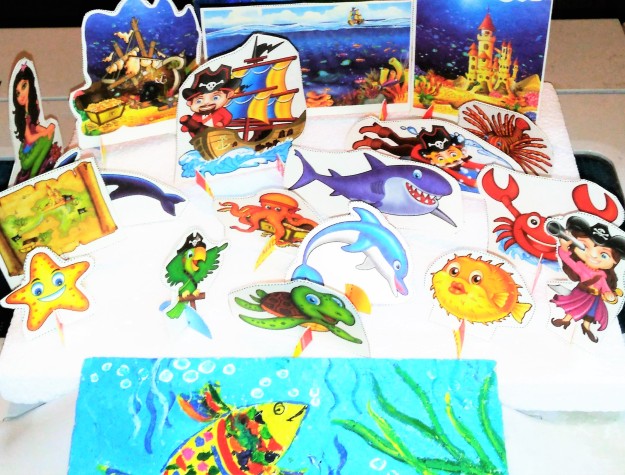 “I am trying my best” shrieked back Sadie, his assistant and co passenger on the ship.

Just then another huge wave came crashing into the ship, almost toppling it over and the duo fall into the water. Their ship started sinking rapidly into the deep sea.

Blackbeard and Sadie try to keep themselves afloat but are soon knocked out by sheer physical drain. Next morning, they wash up on an island and realize the real situation when they are woken up by the bright sunlight.

Actually, Blackbeard and Sadie had been sailing the seas since several months searching for a big treasure hidden at a secret location in the sea. On the way, a storm struck their ship.

When Blackbeard and Sadie looked around, they noticed that the island was deserted and there was no one to help them. For some time, they sat dejected and utterly frustrated. Then, as the sun was setting on the horizon, Sadie decided to search around for something to eat for dinner before it got completely dark.

Soon, she found a coconut tree which had several fresh green coconuts hanging on it. She picked up a big bamboo from a groove nearby and hit it at one of the big coconuts which immediately fell on the sand below.

As Sadie bent down to pick it up, she noticed something shimmering in the sand. On removing the top layer of the sand from the spot where the heavy coconut had fallen and created a small depression, she discovered a shiny brass box.

She hurriedly picked it up and went back to where Blackbeard was still lost in his depressing thoughts of impending doom.

“Look ! what i found” squealed Sadie as she handed over the brass box to Blackbeard.

Blackbeard quickly opened the box and was completely astonished. There was a wonderful surprise for him inside. It was a treasure map which was neatly folded and kept in the box.

“Sadie! This is the map we have been searching for!” exclaimed Blackbeard.

“Are you looking for the treasure hidden in the underwater castle?” a strange voice spoke behind them.

“What?” Blackbeard looked up towards the voice, completely surprised.

“I’m Hari!” said the parrot which was perched on the top branch of the palm tree just behind where they were standing. I had been guarding the map inside the box since long but as  you have  luckily found the box, i will help you find that treasure.

So, next day, Blackbeard and Sadie followed the parrot, who led them to the opposite side of the island. There, the parrot called his friend Rudy-the crab and stated discussing something with him. Rudy, later called the other sea creatures- the lion fish, the sea horse, the dolphin, octopus, star fish, sword fish, and many more.

After a while, Hari flew towards Blackbeard and Sadie.

“My fellow mates have only one condition to support you in getting the treasure; and that is, you must give each of them their rightful share of the treasure after you retrieve it” Hari told the duo.

“Okay, i agree!” said Blackbeard, his face gleaming with joy and determination.

“Hello! there is a boat hidden right there, if you want to start right now” said the crab, pointing towards the mangroves. 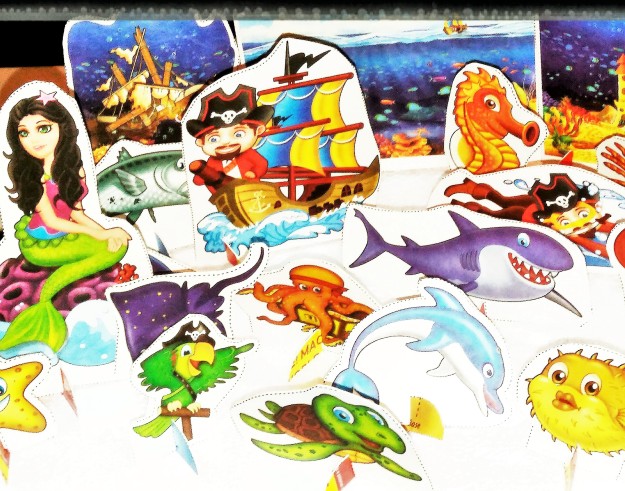 Blackbeard and Sadie immediately take the boat and start their journey, with the parrot guiding them towards the underwater castle for some distance.

“From here my friend Oru- the octopus will guide you underwater and help you carry the treasure back.” Hari told Blackbeard after they had covered half the route on the boat. Now, they would have to swim underwater to reach the castle.

Blackbeard and Sadie followed Oru, swimming with full strength and soon reached the underwater castle. They are overjoyed to find the huge treasure inside the castle which they had been searching for years. Blackbeard divides the treasure equally amongst all the sea creatures, Sadie and himself. He thanks them all for their help.

With this, my son ended his interesting story. I was really amazed by his imagination skills. Thanks to the new Colgate strong teeth packs, i was able to witness a new facet of my son’s personality which i’ll try my best to nurture and polish further.

There are four packs in all of this colgate toothpaste with different themes, which have sea creatures printed on the inner side along with information about these creatures- the coral reef, sea magic, treasure hunt and pirate ship.

This activity is a fantastic way of unlocking your child’s imagination and unleashing their creativity.They learn wonderful facts along with playing. Not to forget, that the mundane chore of brushing teeth, twice a  day becomes more fun for kids when their toothpaste pack is so interesting.

Next day, my son decided to test my knowledge about sea creatures by taking a small quiz. He prepared the quiz from the info he had collected from the colgate packs.

Now, don’t you think this is real infotainment!

You can find the answers to the above questions and many more like these on the inner side of the packs,  so get going and grab the new colgate strong teeth toothpaste which helps not just in fighting against germs and gum diseases but also spark the kids’ imagination towards unrestricted flights of fantasy.